There are more than 15 different oil separation technologies that can be used to treat oily water. Within each technology type there are small design differences between vendors which can get confusing! This page has been put together so that you can better appreciate important design factors and how they affect each oil separator type. The information is in the form of a series of ‘tutorials’. We hope you find them helpful and interesting. Make sure you let us know what you think.

It surprises many to learn that oil can pollute water in several different ways. Understanding the different types of contamination is vital in order to determine what methodology of oil water interceptor will be effective. Typically, there are four main types of oil pollution. 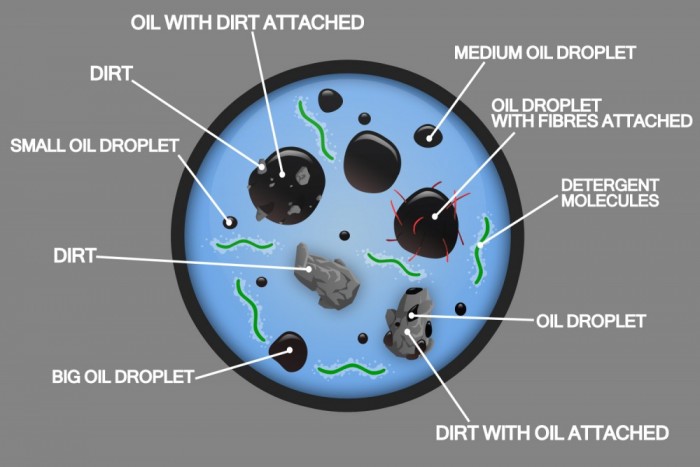 Not sure which of the 4 types of oil contamination you have? Let us help

Give us a call or send an email. Using our extensive data base of customers oil water pollution types we can put you in the picture in no time!

In addition take advantage of our extensive oily water test facilities and laboratory. We are are able to analyse and characterise your oily water problem and give you a full report. In many cases we can do this for free!

Why is Oil Droplet Size so important?

All oily water separators are designed to treat a particular range of micron size of oil droplets – this is called the micron rating of the separator – or micron separator range. Some oil separators wont be able to treat oil droplets that are small (eg Gravity, Coalescing Plate Packs, VGS, European EN-858 Tanks) and some oil water interceptors are not able to treat large oil droplets (e.g. Media filters, DAF and Chemical Treatment systems).

Oil droplet size can be measured on site by a skilled technician with the required equipment. Its is not difficult when you know how but it is a highly specialised area of water analysis; so don’t expect a ‘normal’ laboratory to have the required expertise or equipment. We have many years experience and have the expertise and calibrated equipment, so if you need help let us know.

It is vital to have both an accurate oil droplet measuring tool capable of telling the difference between oil droplets, air bubbles and suspended solids AND a skilled operator experienced in oily water analysis. Ultraspin has the best of both! So if you would like our help please let us know. There is no more guesswork required. 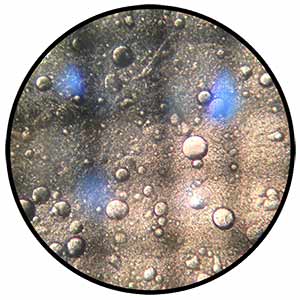 There are a couple of ways to estimate your oil droplet size. They are not as accurate as direct measurement described above but should give you a rough idea.

The Ultraspin table below can give you a guide based on “typical” oily water situations. The presence of suspended solids, additives, detergents or surfactants will change your droplet size to be larger or smaller, so you should account for this if they’re in your water. 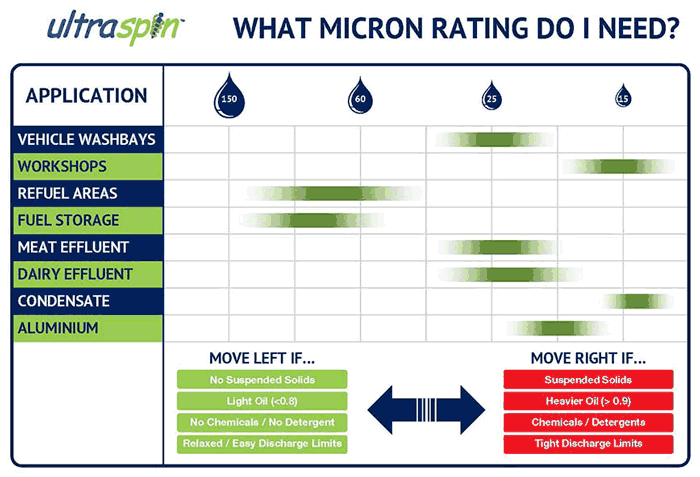 You can also get a rough idea of your oil droplet size with a visual inspection of your sample. In general, if you can see the droplets with the naked eye, they are large, say 150 micron plus. If the water looks hazy, white or milky, the droplets are very small (less than 25 microns, often less than 10 micron). We have a data base of sample photos from thousands of applications with matching droplet sizes to give you a visual guide. Look for a sample that has similar characteristics to yours. If you need help, email us a photo of your sample and our oily water engineers will help you.

Now that you understand the 4 types of oil contamination – and the importance of oil droplet size – you can begin to appreciate how different types of oil separator will work under different oily water feed conditions.

Now that you understand the importance of oil droplet size you will now be able to understand Oil Separator Performance Curves. Many factors affect the performance of an oily water separator system installation. For most customers a primary consideration is oily water separation ability because this defines final discharge water quality or oil recovery rates. Oil Separation efficiency can be expressed as follows:

Oil Water separation efficiency can be objectively accessed by examining the separator oil droplet size vs. separation efficiency curves. For higher quality separators these curves should be readily available from manufacturers. Manufacturers should also be able to confirm performance to these curves by independent testing. The purpose of oily water separators is to obtain clean water. However, claims of a separator being able to achieve less than 10 mg/l discharge are meaningless and deceptive without recourse to oil droplet size performance curves. 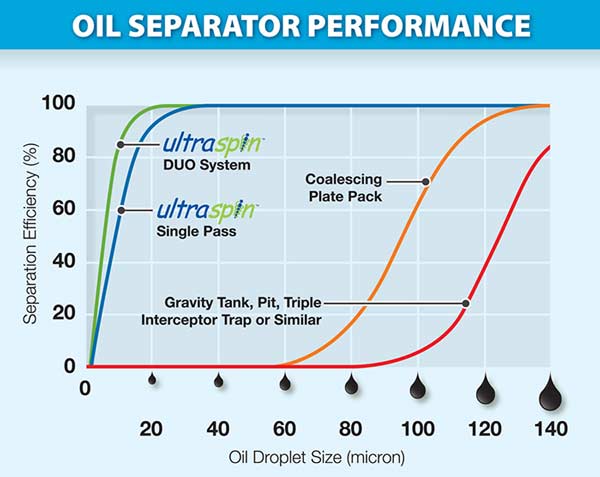 Mean oil droplets size is the single most important factor for defining the dirty oil water, but there are several other factors that are also important.

Oil Water Separators that work better at higher temperatures include:

Oil water separators that may not separate as effectively at higher temperatures include: 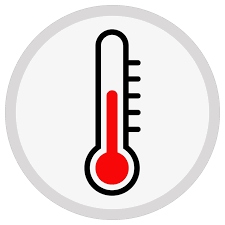 For many oil water separators the oil removal efficiency is dependent on the difference in density between the contaminant and the water. The separation efficiency increases as the difference in density increases. The density difference can increase if you have lighter oils or your water is salty, or both. Typical densities for Oil are 950 to 750 kg/m3 (0.034 to 0.027 lb/in3) and water : 1050 to 995 kg/m3.(0.038 to 0.036 lb/in3).

For these types of oil water separators are not greatly effected by small density differences (say less than 25 kg/m3):

Some types of oil water separator are NOT well suited to high oil feed concentrations and high feed oil concentrations overload or block the systems. For these types of system careful pre-treatment to remove oil will be required.

Other types of system can accommodate 100% oil concentration for a period of time: 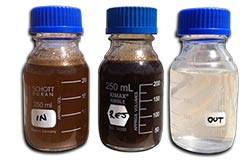 There are many different types of oily water separators on the market. Each type has its own unique design factors that determine how well it will work. It is beyond the scope of this tutorial to list and explain all these factors but some general help is listed. Please note: Oil skimmers, rope and belt skimmers and similar are not considered as they do NOT treat the water but merely remove some of the floating oil.

Simply allowing oil to float to a surface via gravity is a simple way to remove easily separable oil droplets that are about 150 microns or more. Examples of this technology include API separators, triple Interceptors, above-ground tanks or collection pits.

Ultraspin engineers were the designers of the world’s first commercially successful oil removal hydrocyclones. One of the keys to our successful designs is the use of optimum geometric ratios, such as separator length, diameter, orifice sizes and taper angles to achieve maximum separation. By comparison with conventional solids removal hydrocyclones, our designs are very long and generate high centrifugal separation forces.

Many oily water separators, such as the plate pack type, require regular cleaning and maintenance to continue functioning. It is important for customers to fully understand what is involved to keep these technologies operating before committing to a purchase.

To accurately determine the real cleaning and maintenance requirements for oily water separators:

For most conventional oily water separators, like plate packs, the separation efficiency reduces as the flow increases.

But for the Ultraspin system it is the opposite! Increased flow increases the strength of the centrifugal forces, increasing the oil separation force.

The ‘reject ratio’ is the ratio of the oily reject stream leaving the Ultraspin separator to the inlet of feed flow rate of fluid to the separator. This is an important parameter in the operation of the separator. Typical reject ratios are from 1 to 20% subject to design requirements.

A proven method of increasing the power of separation of the Ultraspin separator is to recycle part or all of the treated underflow back to the inlet for further treatment. This is a feature unique to Ultraspin separators. In this way very small oil droplets that missed being separated in the first pass have a second chance at being recovered in the second pass. This can greatly improve separation efficiency with emulsified oily water mixtures.

This can be illustrated by an example:

There are many methods to configure a system including: 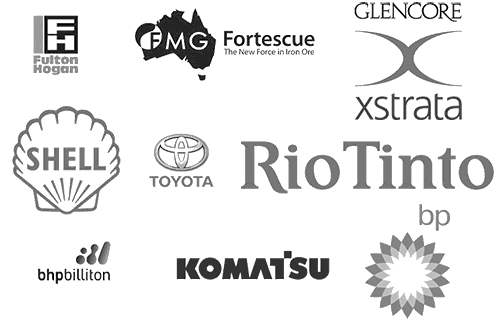